Go Serverless Functions with Ember and SST on AWS You may recall in our last post on serverless functions that we made use of some tooling introduced by Vercel and Netlify for Ember and Glimmer applications.

Now, as we demonstrated in our last post on this subject, developing and deploying serverless functions to Vercel or Netlify is a breeze because of the tooling they provide. But, what if your project has constraints that require a deployment directly to AWS without the use of those other platforms?

Thankfully, there's an answer to that question that isn't too involved. Today we'll focus on deploying serverless functions directly to AWS using a framework called SST that makes it trivial to build full-stack serverless apps.

SST generates the serverless functions, provides a way to run them locally, and supplies a method for deploying these functions, along with your frontend code, to AWS. 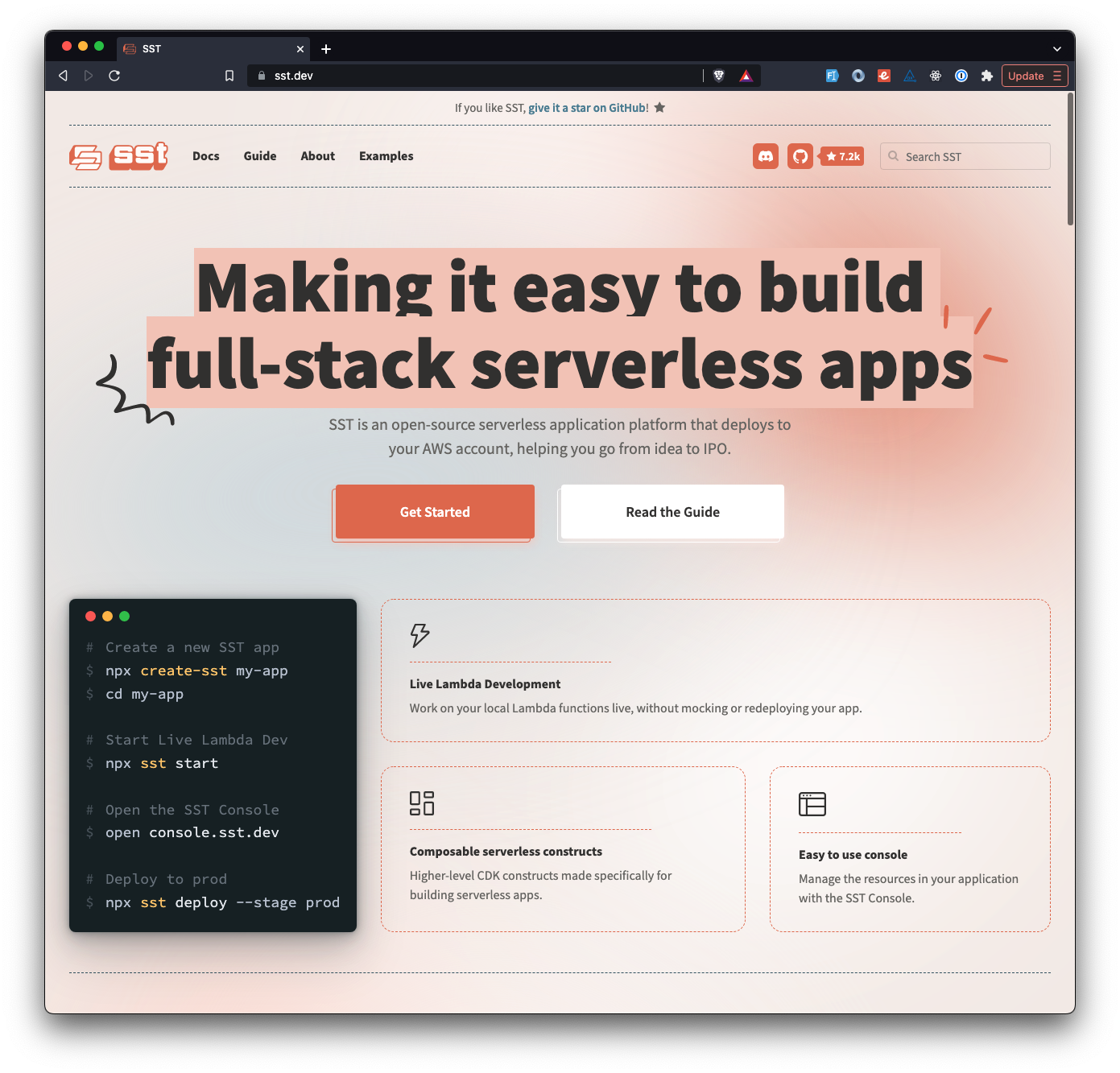 Before we start you'll want to ensure you have an AWS account with the AWS CLI configured locally.

By default, if you run npx create-sst <your-app-name>, SST provides a full-stack application, including an RDS or Dynamo database, and a GraphQL API as well - among other things. Those offerings are powerful and could be a solution for your project, but for the sake of simplicity and staying focused on only adding serverless functions as API Routes for our application, we'll use a more stripped-down SST template to limit what is installed.

To get started we'll run npx [email protected] --minimal <your-app-name>. This will generate a new SST project that includes only the minimal set of things needed to form an SST app with serverless functions. You'll notice that we are presented with an option to choose a template:

We could choose the javascript-starter template if we wanted to create a serverless function written in Node.js. However, since we're presented with the option, let's do something different this time and choose go-starter. This will generate the project for us, but the serverless functions will be written in Go lang instead. Here's a look at the Go servless function that's generated: 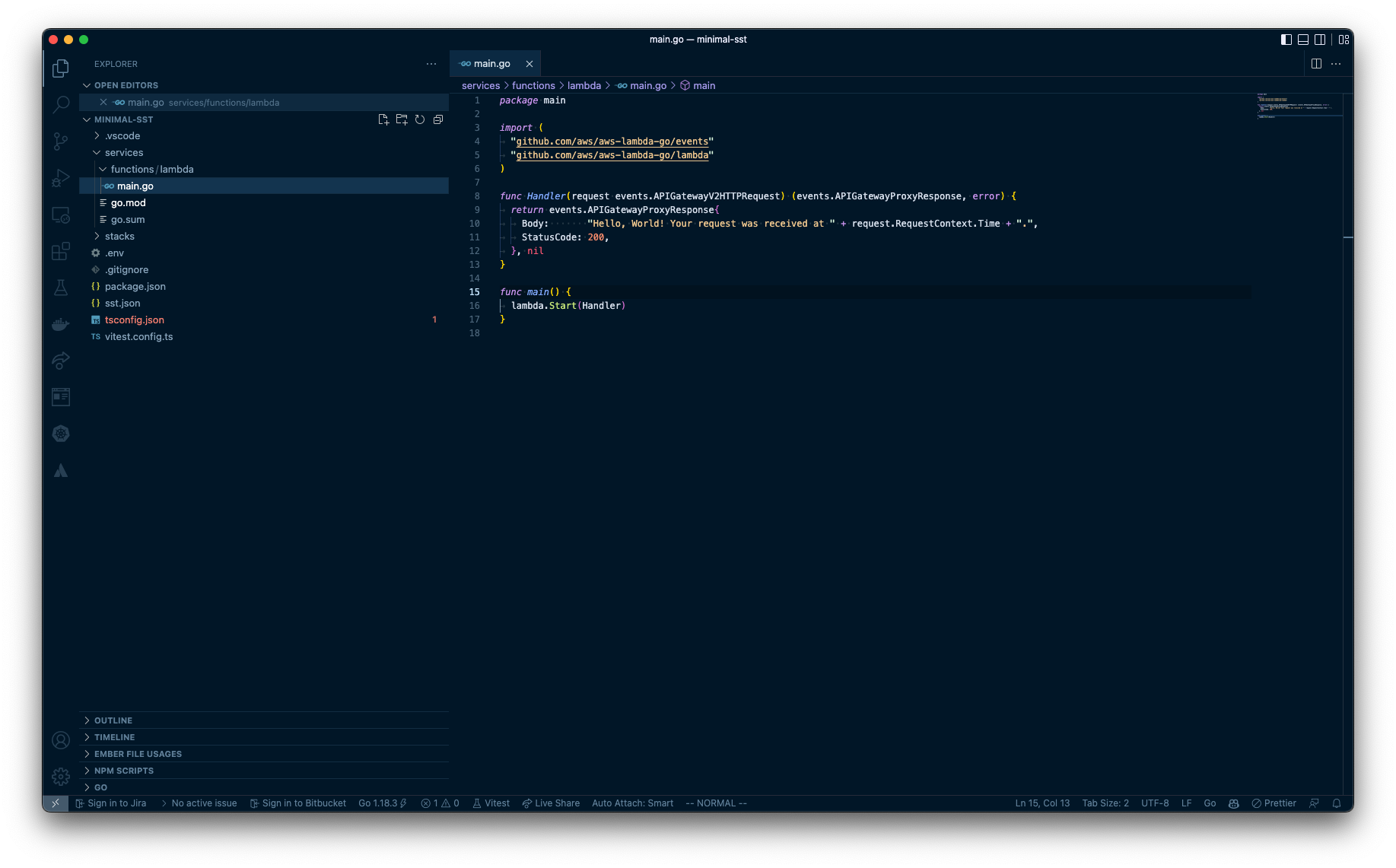 Now that we have an SST project started, let's navigate into that project and generate a new Ember.js application at the SST project root with npx [email protected] new frontend. We'll call the new Ember project, frontend, to keep things generalized and we'll also note that the frontend code here doesn't have to be Ember. There are many examples that you can auto-generate with the npx [email protected] --examples command that will come pre-packaged with an example frontend repository. Hopefully, one day one of those examples will include Ember, but for now, there's a small piece of manual configuration we need to set in place for things to work.

After generating the frontend application we'll make some adjustments to the ./stacks/MyStack.ts file. Go ahead and add an import for StaticSite and let's also add a new StaticSite that will point to our Ember application:

This will tell your SST project about your Ember application, how to build the Ember code and where to save the build. After this, we should go ahead and run npm install or yarn in both the SST project root and the Ember project root. Note, at the time of this writing, we had to use Node 16 and chose the latest LTS, lts/gallium, but your mileage may vary.

If you now run yarn start or npm start from the SST project root this will start the SST side of things, which includes creating debug deployments that help run the serverless function locally. The SST CLI will ask for an environment name which we'll provide as dev, but you can call it whatever you like.

This may take several minutes to complete since SST is conducting an actual initial deployment (SST uses something they call live lambda development, which includes deploying services for your development environment to interact with), but at the end of the process you should see something like the following which should include the ApiEndpoint where the serverless function can be reached: 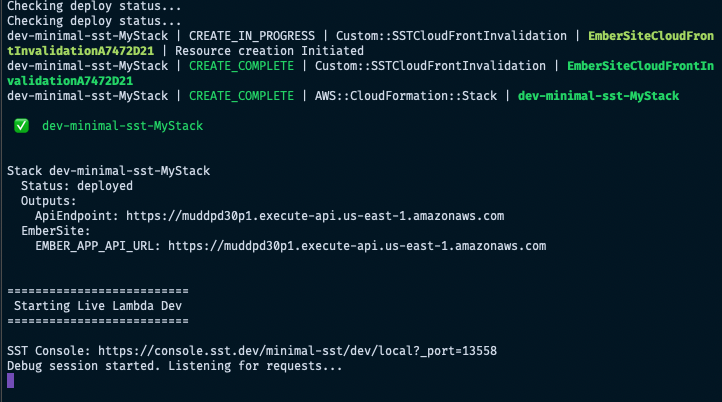 Now before booting our Ember app we'll probably want to set things up so that the Ember application communicates with the serverless function. We'll do that by generating an application route in the Ember app and sending a fetch request to the ApiEndpoint URL as a gut check to ensure we can retrieve some data.

We'll also modify the ./config/environment.js file to set this environment variable in the Ember app for use later on:

And finally, we'll tweak the serverless function to respond with JSON rather than a string:

With all those things we just did wired up you can fire up the Ember app as you normally would and check in the browser that the serverless function is returning the data we expected: 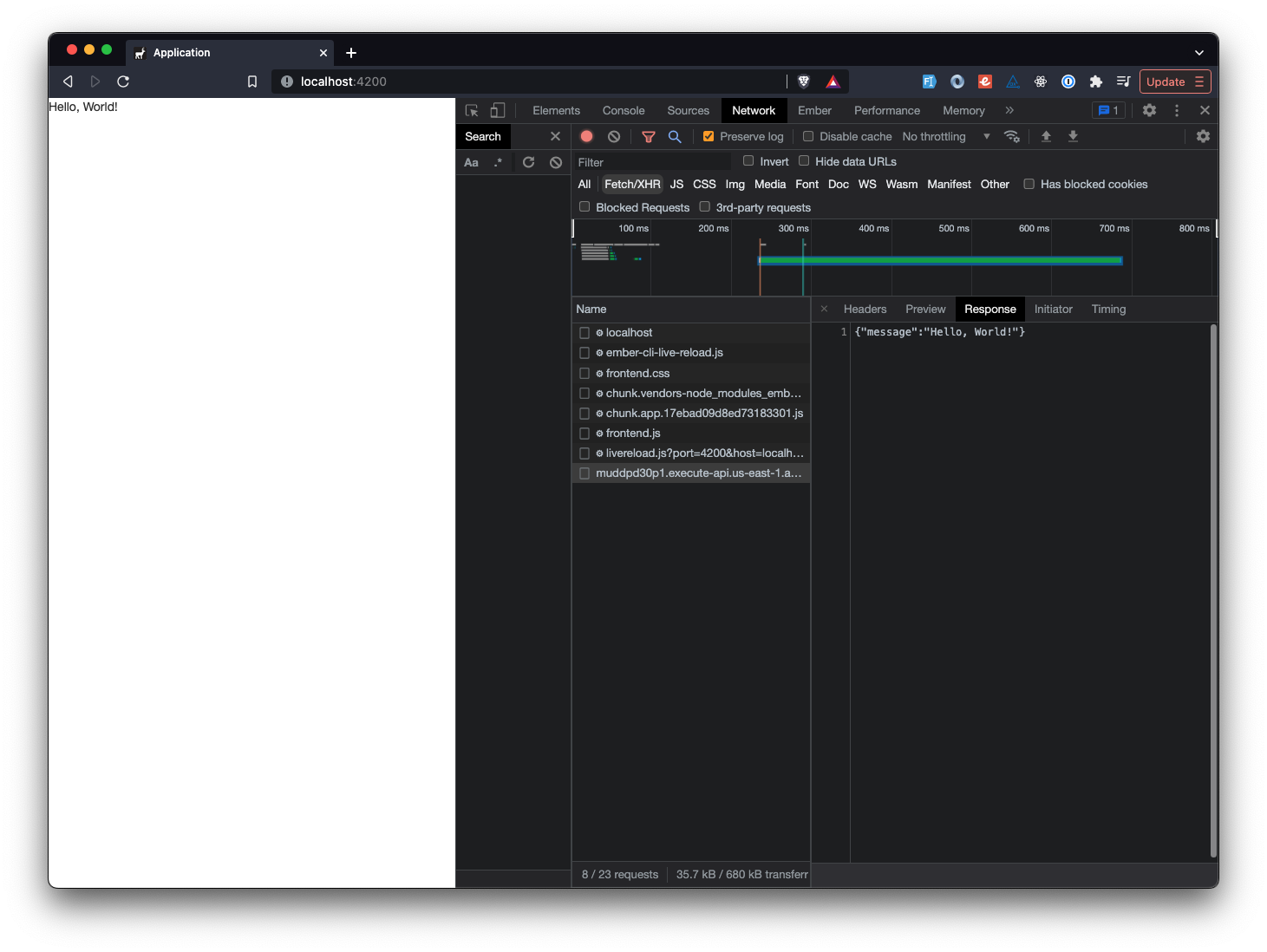 And there is our Ember app with a Go-based serverless function that is deployable to AWS, and we only need to take one more step to deploy it!

If we run npx sst deploy --stage prod, SST will handle all the details of deploying the app. Again, this will take several minutes to completely deploy.

Once it's done we'll need to set the prod ApiEndpoint URL provided in the output of the deploy logs as an environment variable in the Ember app and re-deploy using the same command. Once that deploys you've got an Ember app with a Go lang serverless function deployed to AWS! 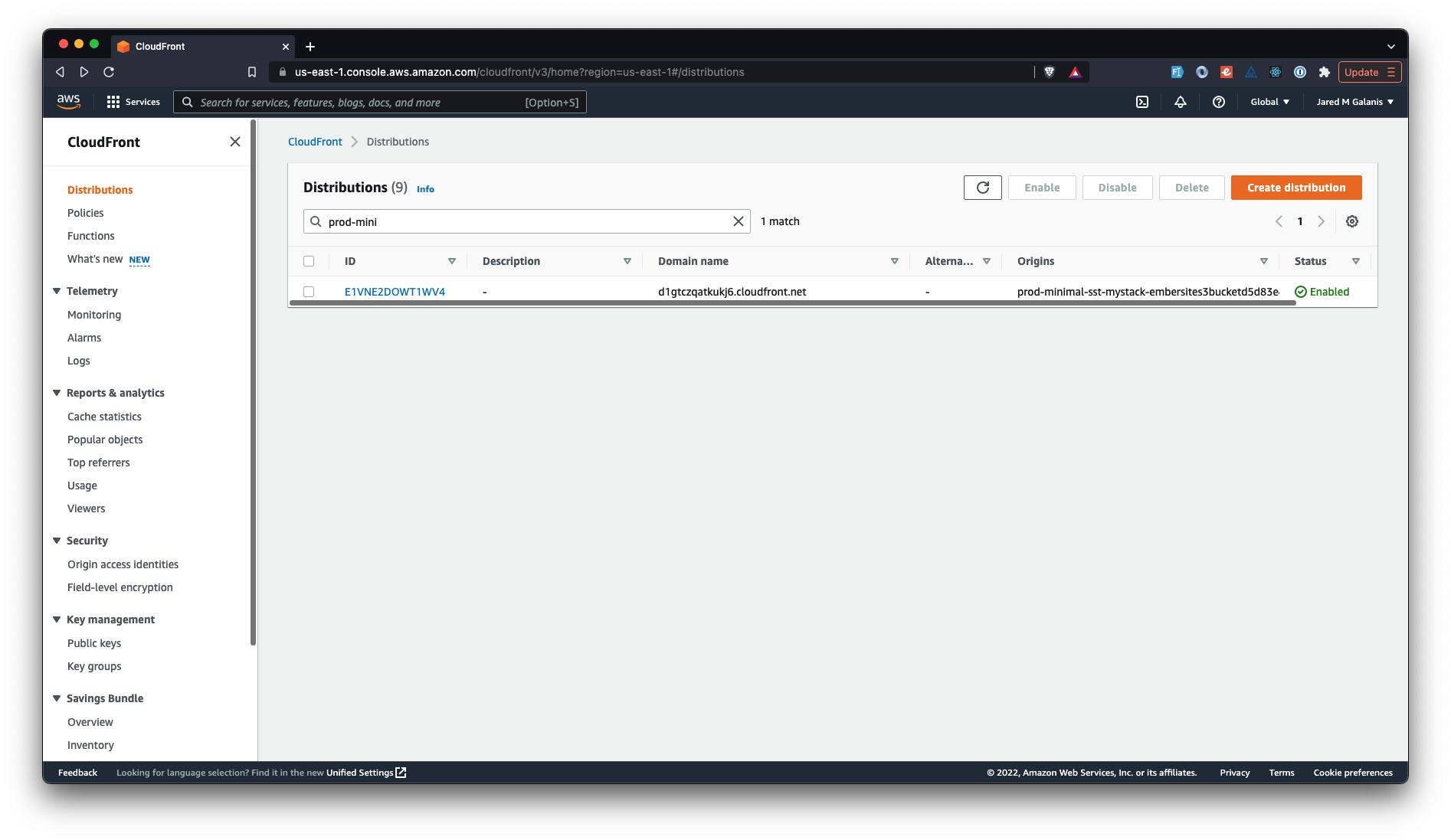 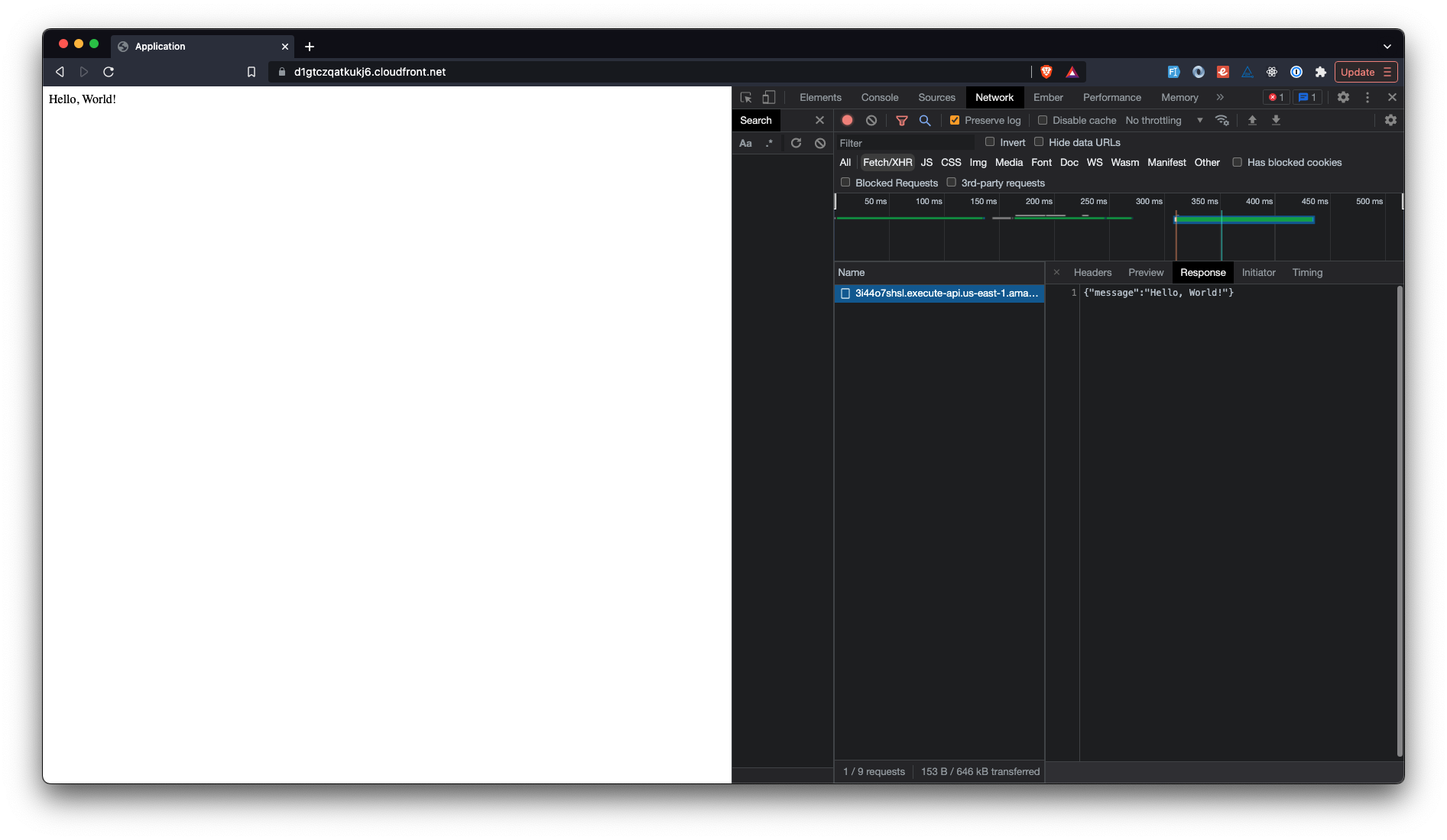 Now, this is not the only way you can deploy serverless functions and an Ember application directly to AWS, but it sure is a convenient one.

In future posts on this topic, we might look at alternative means for deployment that require a little more configuration, but which provide more control over the deployment and architecture, so stay tuned!

Adding desktop notifications to your app/site

Building (or Rebuilding) a Website with Accessibility in Mind